Extended Abstract of my Research


Soil erosion is basically a natural process of soil displacement by erosive agents such as water, ice or wind. However, due to human activity and climate change, soil erosion can be accelerated and become a serious environmental problem. Water is widely known as the most important factor of erosion in the world. It occurs when raindrops detach soil particles from the main mass of soil, then it flows over the soil surface, and transports this loose soil from the site of detachment.


During the last twenty years, a lot of researches have been conducted to quantify soil erosion rates in different types of ecosystems with different methods such as direct measurement or soil loss equation models (Boix-Fayos et.al, 2006). Recently, a fingerprint tracer method by using radioisotopes is being developed to estimate the annual soil erosion rate (Leopold and Volkel, 2007). This technique helps obtain the average value of soil erosion rate. One of the radio isotope elements widely used is 137Cesium (radio cesium). 137Cesium is the fallout product of nuclear weapon testing conducted globally during the period from 1956 to 1967. 137Cesium is distributed all over the atmosphere and falls back to the earth’s surface mainly by the precipitation. Since 137Cesium is strongly adsorbed to clay particles of soil, it resists to leaching through the soil profile (Flores and Benitez, 1999). Since the half-life of 137Cesium is 30.1 years, it is possible to estimate the soil erosion rate for a period of several decades through the measurements of 137Cesium (Bhat et.al. 2010).

The assessment of 137Cesium tracer is based on the comparison between measured 137Cesium radioactivity inventories at individually observed areas with the inventories in the reference site. Reference site represents an area with the cumulative fallout input without any significant change since the first fallout in 1956 to 1967.


This research was carried out at Kuraiyama experimental forest of Gifu University, which is located near Gero city, Gifu Prefecture, Japan. As shown in Figure 1, the study consisted of one reference site and two observed areas. Two observed areas were located in the upstream of a slope with two different forest undercovers and divided by three points: up, middle and down. Site A is covered by Japanese cedar (Crytomeria japonica) without any forest undercover vegetation. Site B is covered by Japanese cedar with Sasa Bamboo (Sasa senanensis) as forest undercover vegetation. Both sites have similar percentage of slope steepness (120-130%) and slope length (60-65 m) (Figure 2). While the reference site is located in the downstream, represents a flat area with no erosion activity, and away from human disturbance. 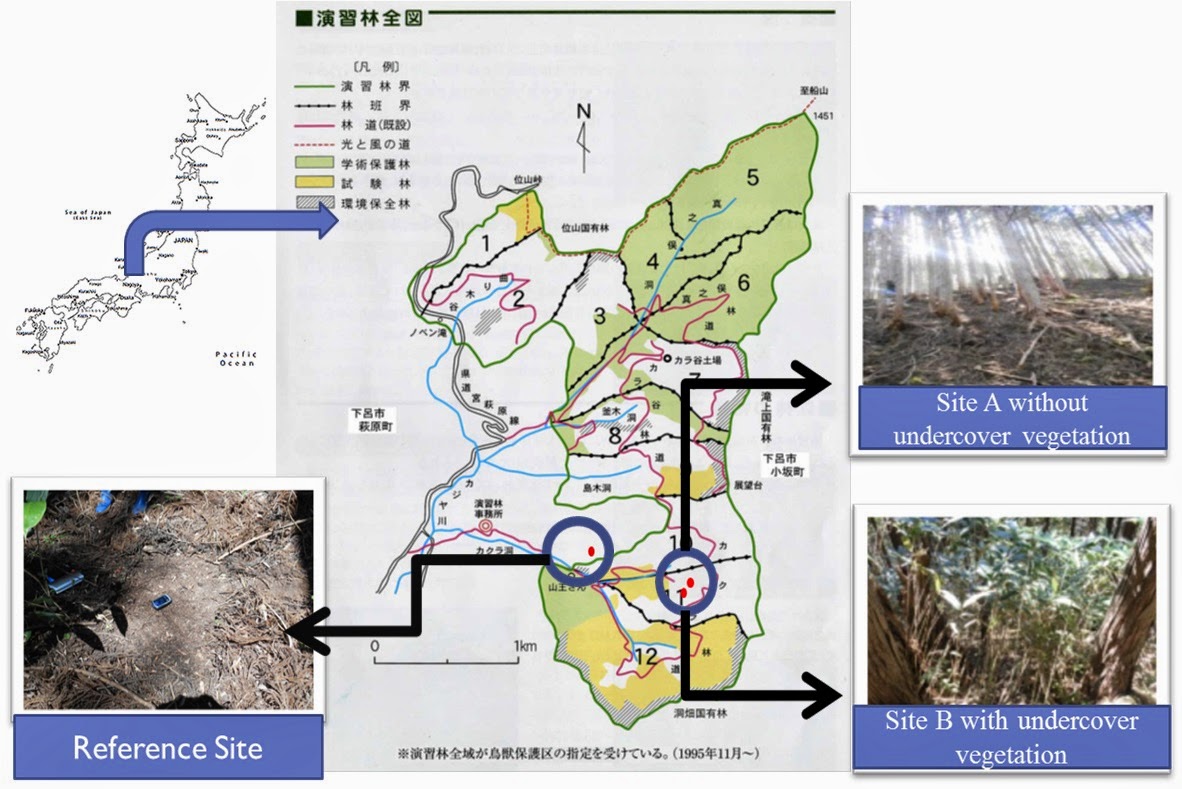 Fig. 2 : The illustration of Site A and Site B

To estimate the soil erosion rate, the basic principle of using 137Cesium as a fingerprint tracer is that 137Cesium movement in soil profile is essentially related to soil particle movement. By comparing the total radioactivity per unit area at observed areas with that of a reference site, considering 137Cesium redistribution through soil movement, the net soil erosion rate can be estimated (Walling and Quine, 1993;Zapata, 2010).
Soil samples were taken from 8 different depths (0-2 cm, 2-5 cm, 5-7 cm, 7-10 cm, 10-15 cm, 15-20 cm, 20-25 cm, and 25-30 cm). All samples were oven-dried at 105oC for 24 hours. Then chilled, disaggregated and sieved. Soil particles that passed through a 2-mm sieve were packed in a U-8 plastic container of 100 g for gamma spectrometry in a High Purity Germanium (Ge) detector. The acquisition time for each sample was 20 hours (72,000 seconds).
The soil erosion rate had been calculated from each site by using the profile distribution models based on the assumption that the depth distribution of 137Cesium is the most important factor to estimate soil erosion rate (Poreba, 2006), based on an equation written by Walling et.al (1990):

h0 is the relaxation depth describing the profile shape given in Kg m-2 by fitting the following exponential function derived from reference site inventory data, 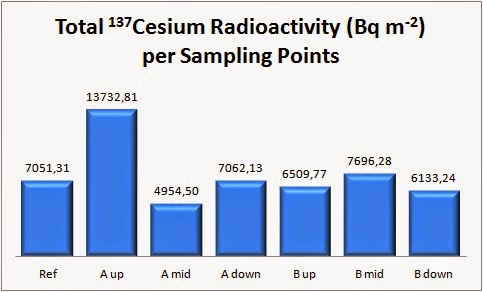 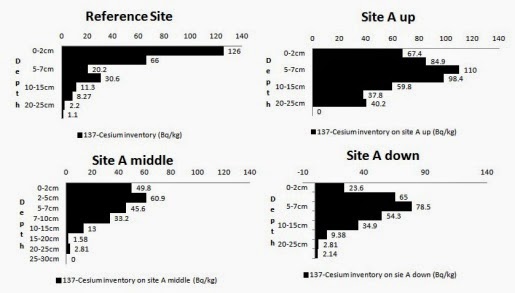 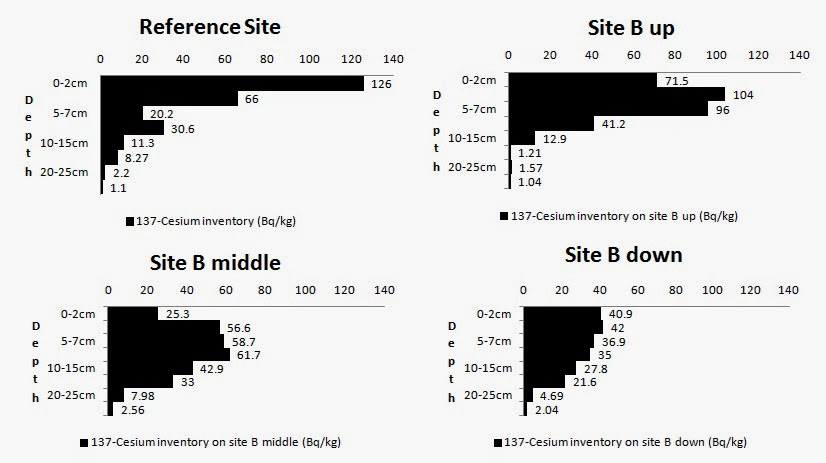 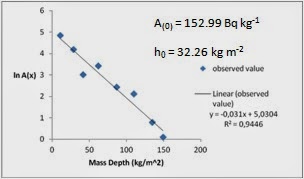 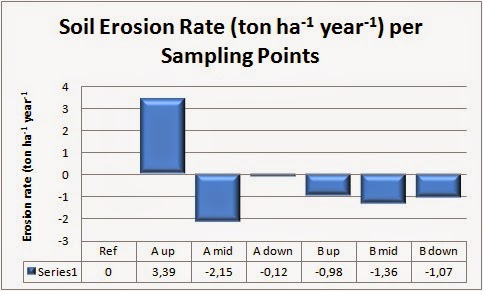 The observed areas shown in Figure 3e which have undercover vegetation (Site B) tend to have lower rates of both erosion and deposition compared to other the ones without undercover vegetation (Site A). However, the rates were not consistent with the observed topography. It is indicated through the comparison between the radioactivity in observed and reference sites in which the 137Cesium radio activity is randomly deposited against the slopes in both observed areas.
The Profile Distribution Model is a simple yet premature equation model based on the profile shape factor of 137Cesium radioactivity through the soil profile. In this method, several erosion factors such as soil properties, rainfall, and topography are not required in determining the erosion factors on each site. Besides, a large observation area is critical to understand the real impact of 137Cesium movement in conjunction with soil displacement.

Brigido Flores, O. and Gandarilla Benitez, J.E. (1999). Preliminary Assessment of the Potential for using Cesium-137 Technique to Estimate Rates of Soil Erosion on Cultivated Land in “La Victoria I”, Camagüey Province of Cuba. Proceedings of the II International Symposium on Nuclear and Related Techniques in Agriculture, Industry and Environment. II Workshop on Nuclear and Related Techniques in Environment